Introduction to the Technology Progress Report

This report is part of DNV’s suite of Energy Transition Outlook publications for 2021. It focuses on how key energy transition technologies will develop, compete, and interact in the coming 5 years.

Debate and uncertainty about the energy transition tends to focus on what technology can and can’t do. All too often, such discussions involve wishful thinking, advocacy of a favoured technology, or reference to outdated information. Through this report, we bring insight derived from our daily work with the world’s leading energy players, including producers, transporters, and end users. Each of the ten chapters that follow are written by our experts in the field – or, in the case of maritime technologies, the ocean.

Because the pace of the transition is intensifying, describing any given technology is like painting a fast-moving train. We have attempted to strike a balance between technical details and issues of safety, efficiency, cost, and competitiveness. Transition technologies are deeply interlinked, and in some cases interdependent; any discussion on green hydrogen, for example, must account for developments in renewable electricity, hydrogen storage and transport systems, and end-use technologies such as fuels cells.

Our selection of ten technologies is not exhaustive, but all of these technologies are of particular interest for the pace and direction of the energy transition. They range from relatively mature technologies like solar PV, to technologies like nuclear fusion which are some distance from commercialisation but which have current R&D and prototyping worth watching. Together they cover most, but not all, key sectors. We describe expected developments for the coming decade which, to a large extent, will determine how the energy transition unfolds through to mid-century. As such, this Technology Progress report is an essential supplement to our main Energy Transition Outlook forecast.

Our aim is to make an objective and realistic assessment of the status these technologies and evaluate how they contribute to the energy transition ahead. Attention to progress in these technologies will be critical for anyone concerned with energy.

Open All Close All

In addition to the all-encompassing goal of decarbonization, there are other current trends affecting development and changes in the energy system. Universal access to modern, clean, and safe energy is a key Global Goal. Digitalization, and efforts to tackle local air pollution, are also pushing energy technology progress.

Driven by these efforts, the energy system is transitioning from one reliant on fossil fuels to one based on a diverse range of technologies that emit significantly less CO2. Much of the progress so far has been enabled by progress in technology, a process sometimes described by economist Joseph Schumpeter as “creative destruction". New innovations are replacing existing ones that are rendered obsolete over time. Just as the horse and buggy was replaced by Ford’s Model T, last century’s internal combustion cars are being replaced by Ford’s Mach-E and other EVs. In our Energy Transition Outlook publications, we describe our best estimate of the energy transition to 2050. Each coming decade will see major transformation of different parts of the energy system. Perhaps the 2020s will be remembered as the technology decade which gave rise to several technologies – at different stages of readiness – that impacted the energy transition profoundly in the years to 2050.

There are two selection criteria for how we choose a technology for inclusion in this report. First is whether it will lead to an observable shift in the energy system. We predict on the basis of how quickly the technology is being deployed and whether costs are expected to fall over the next five years. Many of the technologies described here have already seen big reductions in cost and will double in capacity many times over the coming decades. Thus, there will be observable shifts in the energy system.

The second factor is how the technologies interact with each other, sometimes referred to as sector coupling or energy value-chain integration. The overlapping and supplementary nature of several technologies can combine to create a step change and accelerate the creative destruction of existing technologies and pave way for the entrance of something new.

The technologies that meet these criteria span the energy system: production, transport, and storage of energy, and the use and conversion of energy into useful services. Step change tends to happen when technologies combine. Floating offshore wind alone can provide electricity to the grid, but interconnected with a meshed offshore grid, new integrated battery technologies, connected EVs, and green hydrogen production, can improve the flexibility by an order of magnitude and accelerate the usefulness and competitiveness of the whole system.

For hard-to-abate sectors such as shipping, there are limited options for reducing emissions while still servicing the global demand for goods. Thus, new propulsion technologies using hydrogen fuel cells and nuclear have potential. The development of maritime technologies seldom happens without complementary development on land. In the case of fuel cells, an infrastructure of low emission hydrogen must be built and the whole value chain of such technologies will need connection. For nuclear technologies to develop, new and emerging advancement of Small Modular Reactor (SMR) must be successfully deployed on land. There, SMR’s first challenge will be competing with land-based solar PV and wind. All the technologies described here are connected and both compete with and depend on each other. Thus, we can use our system dynamics diagram of causal loops describing parts of our Energy Transition Outlook model to show how connected the energy system and the technologies are (download the report to see the model). Note, the diagram only shows high level interactions between transport demand and the power system. Other major demand sources are not detailed.

For any given technology, costs tend to decline at a constant rate with each doubling of accumulated capacity. This is called the Cost Learning Rate (CLR). Each doubling of the installed capacity of a technology takes longer, progressively slowing the annual rate at which costs will decline. CLRs come from core technology improvements based on research and innovation (e.g., around material choices or modal shifts from combustion engines to electric ones). CLRs are also driven by more effective production, where learning-by-doing and experience from increased deployment improves over time. Economies of scale, where the cost of producing the initial unit compared with the Nth unit of a component fall over time, also play a role. CLRs tend to be self-reinforcing: cost reduction both causes and is caused by the growing number of unit installations.

In some industries, for example extractive industries, costs rise with time because the easy deposits tend to be accessed first. Similarly, for some renewable energy technologies, the most favourable spots for installation are used first with decreasing yield over time as more capacity is built out. This ‘stress’ driver contributes to the improvement and progress of technologies.

It takes time for a new technology to replace an existing one, especially when considering the scale and size of the global energy system. However, compound growth of a new entrant will eventually change a system of any size. For instance, passenger EV sales numbers were barely noticeable in 2015, with less than 300,000 sold annually, but by 2025 we forecast the number of new EV passenger vehicle sales to have surpassed 20 million per year, a 20% global market share of new vehicle sales.

Today’s increasingly mission-oriented energy transition differs from previous transformations of the energy system. The Paris Agreement and Sustainable Development Goals combined with green initiatives and COVID-19 stimulus packages, will intensify government action and policies on climate, energy, and technologies targeting structural energy-system changes that address planetary, economic, and human development risks. The use of near-term policy action to fulfil long-term goals is unprecedented and differentiates the current energy transition from previous ones that have mainly been driven by market forces.

The global finance industry is also increasingly recognizing the rewards of cleaning up its portfolio. Green bonds and companies addressing decarbonization are rewarded with high share prices and grow rapidly. TCFD identified the financial risks of climate change and recommended companies use forecasts to better understand them. The challenges and opportunities facing the finance community in supporting an affordable, accelerated and just transition will be addressed in more detail in our upcoming publication, Financing the Energy Transition, published in September along with our main Energy Transition Outlook 2021.

This present report describes most of the technologies that all net-zero commitments and pledges towards a Paris-compliant future will aim to use. No single technology can solve the challenge, rather they will need to work together. The focus going forward will no longer be the competition between fossil and non-fossil solutions, but rather how to accelerate the uptake of new decarbonization technologies. All of these technologies, with the expectation of nuclear fusion, also play a role in our upcoming Energy Transition Outlook 2021 where, inter alia, these technologies interact in our system dynamics model all the way out to 2050, and we describe the effect this has over a 30-year timeline. However, it is the next few years will be pivotal for these technologies. If we are to have any chance of reaching the ambitions of the Paris Agreement, these technologies must be scaled and the transition to a low carbon future accelerated now. 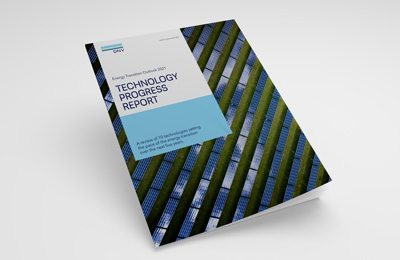 Get the full report

DNV's Technology Progress Report: 10 technologies setting the pace of the energy transition over the next five years