1. We are not meeting Paris ambitions; there is a very short window to close the gap 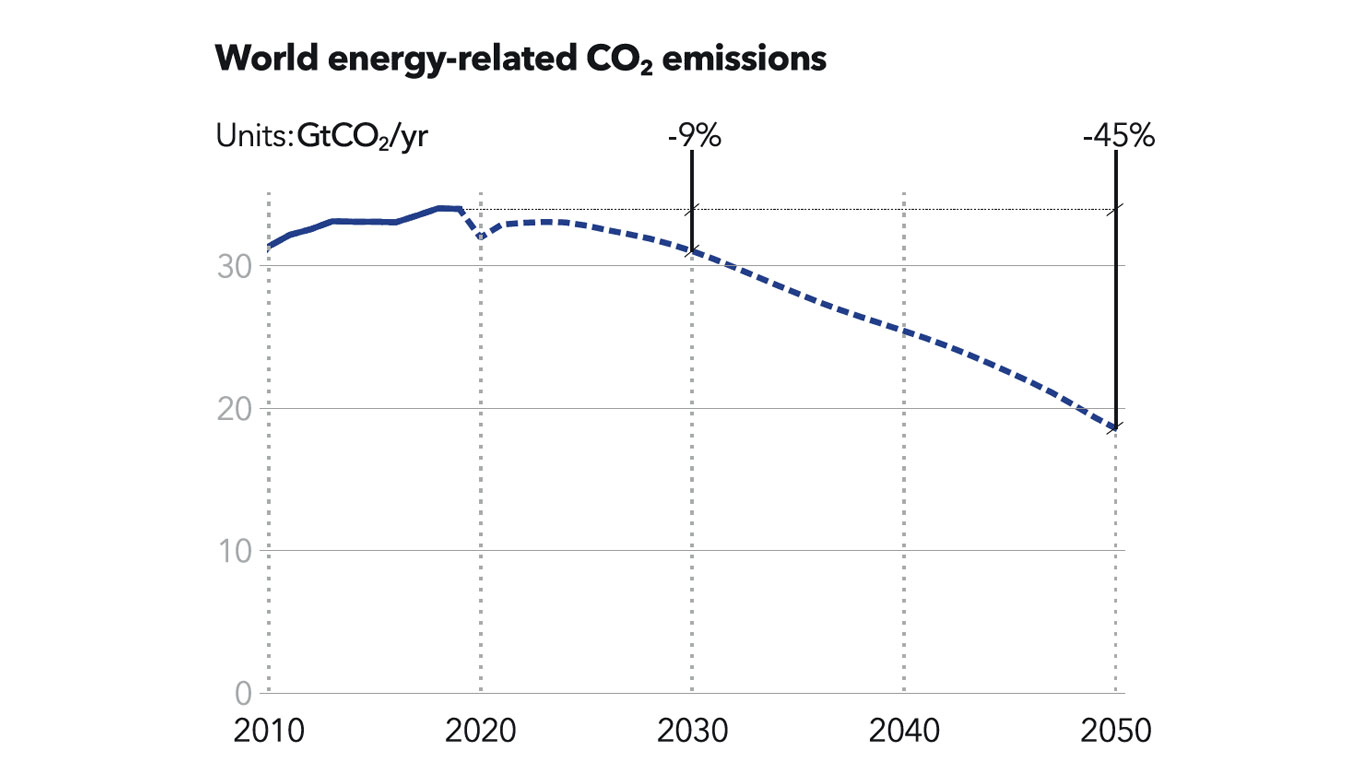 Emissions are now rising sharply again and will grow for the next three years before starting to decline.

While they are being added at great speed, renewables currently often supplement rather than fully replace thermal power generation. By 2030, global energy-related CO2 emissions are likely to be only 9% lower than 2019 emissions, and by 2050 only 45% lower. This is in sharp contrast to ambitions to halve GHG emissions by 2030 and to achieve the net zero emissions by 2050 required to limit global warming to 1.5˚C. Our forecast is that we are most likely headed towards global warming of 2.3˚C by 2100.

As CO2 emissions continue to accumulate, the window of opportunity to act narrows every year. Relying on large net-negative emissions technologies and carbon removal in the latter half of the century is a dangerous, high-risk approach. For global temperature increase, every fraction of a degree is important, and all options to reduce emissions need urgent realization

2. Electrification is surging ahead, and renewables will outcompete all other energy sources 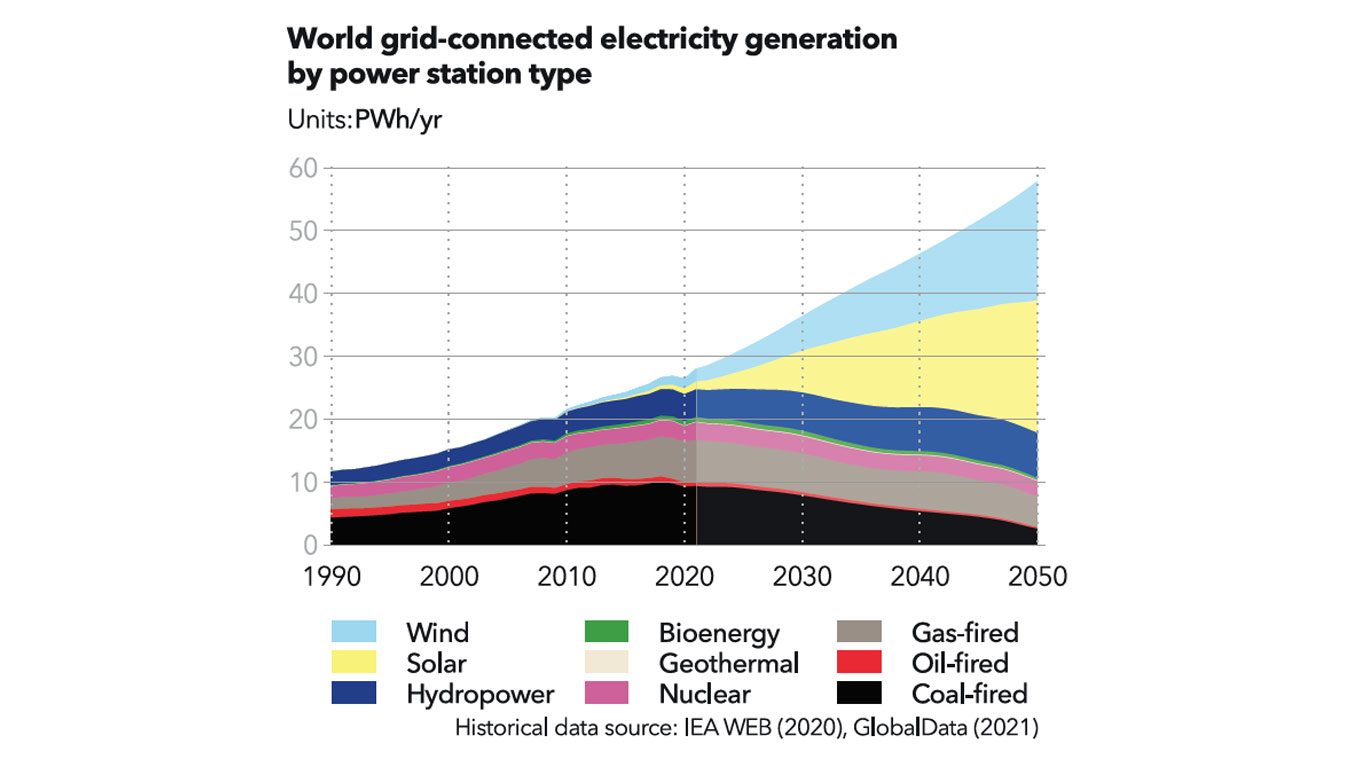 Electrification is by far the most dynamic element of the energy transition.

The share of electricity in final global energy demand is set to double from 19% to 38% within the next 30 years.

Solar PV and wind are already the cheapest form of new power almost everywhere, and within a decade it will also be cheaper than operating existing thermal power in most places. By 2050, solar and wind will represent 69% of grid-connected power generation, and fossil power just 13%. Connectivity, storage and demand-response will be critical assets in the decarbonized power system.

On the demand side, passenger and commercial EV uptake is rising quickly in Europe, China and to some extent the US. Government incentives, cost reductions and technology improvements in both batteries and charging infrastructure will drive a rapid expansion. By 2032, half of all new passenger vehicles sold globally will be electric, with some regions lagging owing to infrastructure challenges. In buildings, heat pumps use will triple, providing 42% of space heat in 2050 while consuming only 15% of energy used for space heating.

3. Efficiency gains lead to a flattening of energy demand from the 2030s 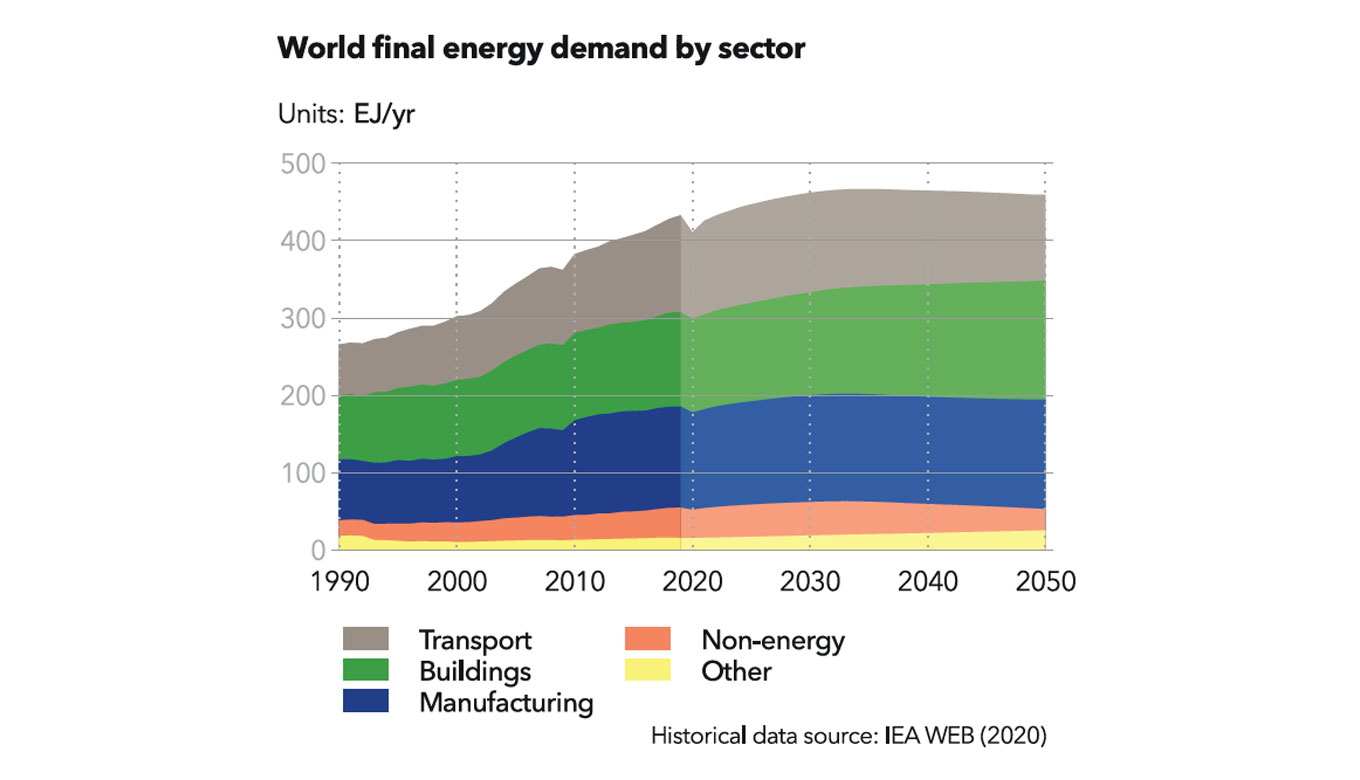 Energy efficiency is the unsung hero of the energy transition and should be the number one priority for companies and governments.

Many efficiency measures have marginal or even negative costs, but due to split incentives and/or a lack of long-term thinking, industry standards and regulations are needed to ensure implementation.

Energy intensity (unit of energy per dollar of GDP) improvements will average 2.4%/yr during our forecast period – against the 1.7%/yr average over the last 20 years. Most of the accelerated efficiencies are linked to electrification, with the remainder coming largely from efficiency improvements in end uses, such as better insulation. The largest efficiency gains happen in the transport sector, but there are significant gains also in manufacturing and buildings.

Overall efficiency gains will result in a levelling off in global energy demand despite a population increase of 22% and the global economy growing 111% the next 30 years. Global energy demand will grow only 8% from 2019 to 2035, thereafter remain essentially flat the next 15 years.

4. Fossil fuels are gradually losing position, but retain a 50% share in 2050 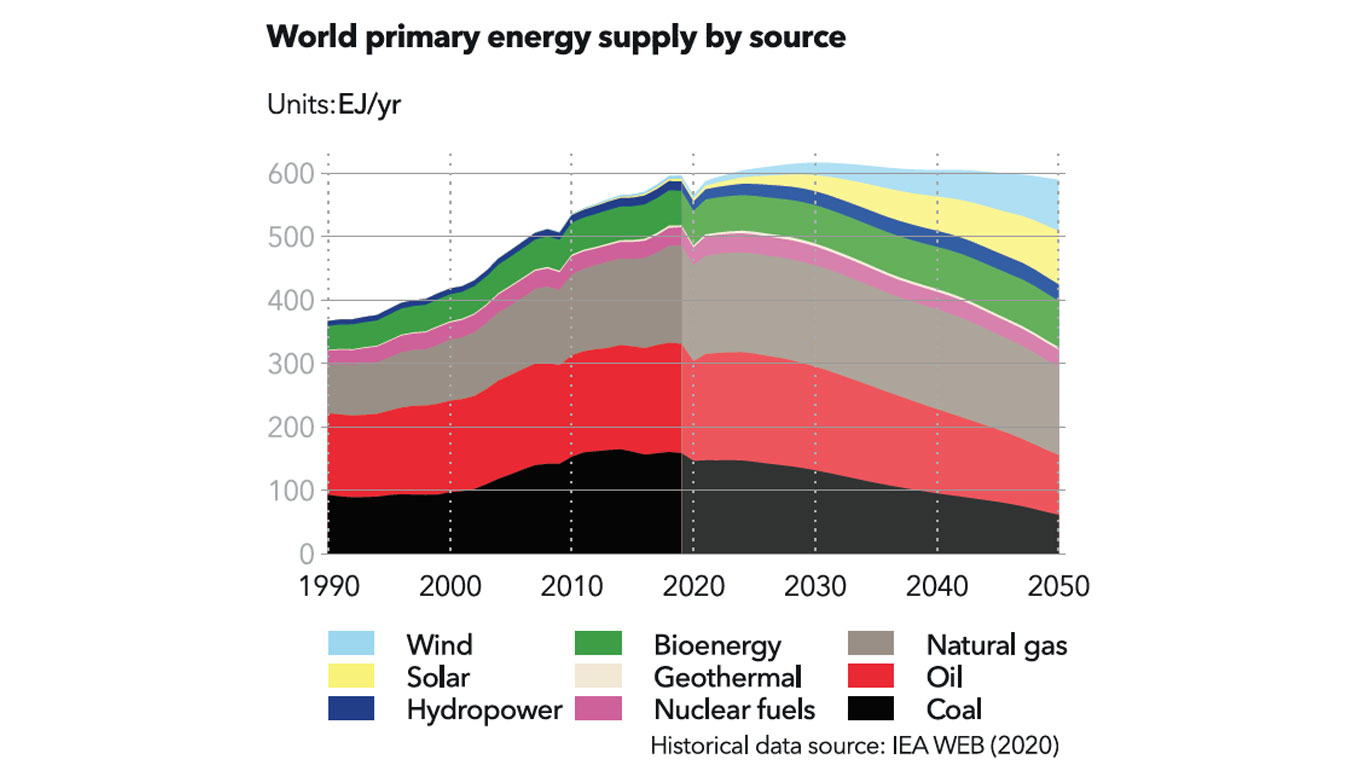 Fossil fuels have held an 80% share of the global energy mix for decades.

We forecast that, by mid-century, fossil fuels will decrease, but still hold a 50% share of the energy mix, testament to the inertia of fossil energy in an era of decarbonization.

Coal use will fall fastest, down 62% by 2050. Oil use stays relatively flat until 2025 when it starts a steady decline, to just above half of current levels by mid-century. Gas use will grow over the coming decade, then levels off for a 15-year period before starting to reduce in the 2040s. Gas will surpass oil as the largest energy source and will represent 24% of global energy supply in 2050.

Decarbonized fossil energy is an important aspect of reaching the Paris Agreement, but the uptake of carbon capture and storage (CCS) is forecast to be woefully slow, mainly for reasons of cost, with just 3.6% of fossil CO2 emissions abated in 2050. 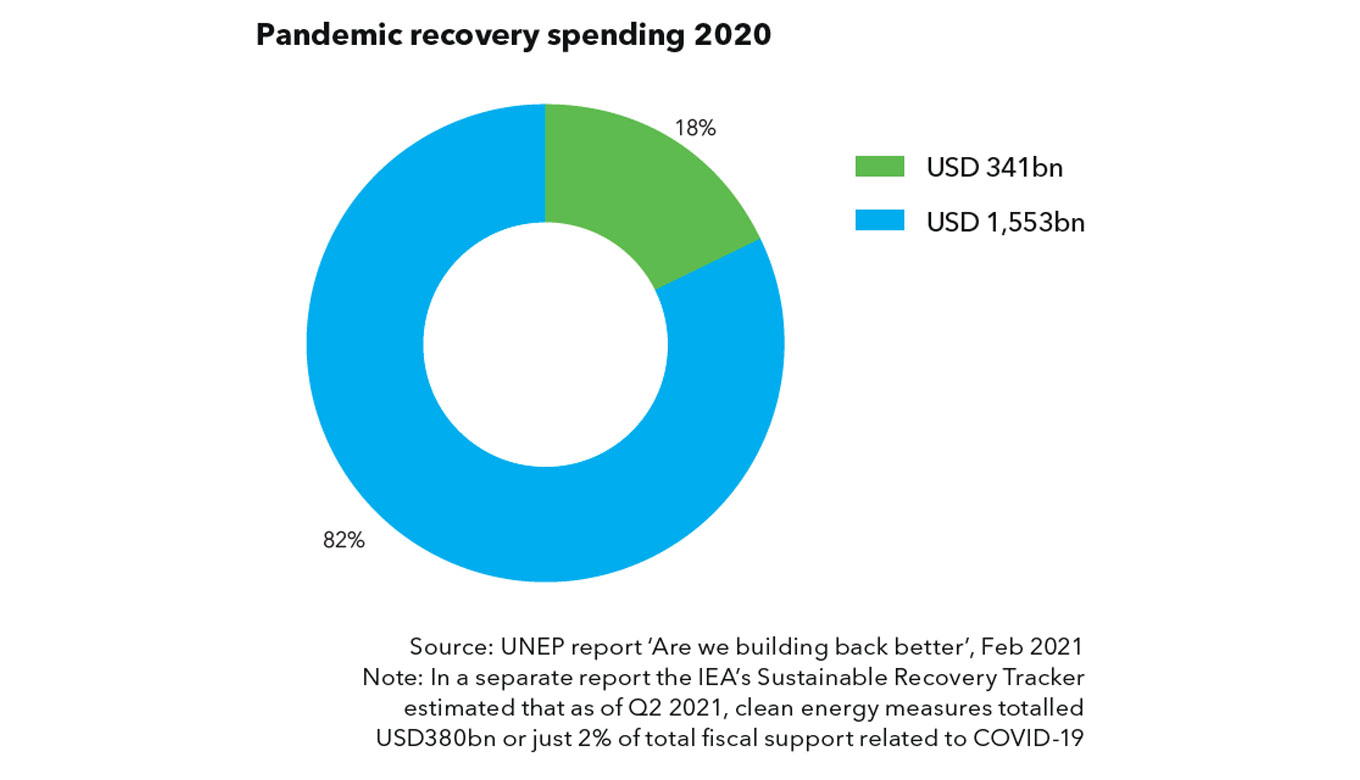 Government interventions, to stop the spread of the virus and then to restart activity, revealed how effective national and global actions can be.

Similar action and funding have yet to be applied to the unfolding global climate crisis.

The trillion of dollars pushed into the global economy over the past 20 months have mainly been directed towards emergency measures like wage supplements and on building back the existing economic and industrial engine. Yet the opportunity for a green reset of production, transport and economic activity was unique, and as we wrote in ETO 2020, “The post-COVID-19 stimulus packages hold the potential to alter the speed of the transition.” With some notable exceptions, particularly in the EU, governments have not steered recovery spending towards a decarbonized outcome.

Global CO2 and GHG emissions fell 6% in 2020 but will rise again this year. While the emissions trajectory has shifted down slightly, that is due to lost economic activity, not energy-system renewal. The overall pace of the transition has not accelerated, and that is a lost opportunity.

6. Variability and low power prices are not roadblocks to a renewable-based power system 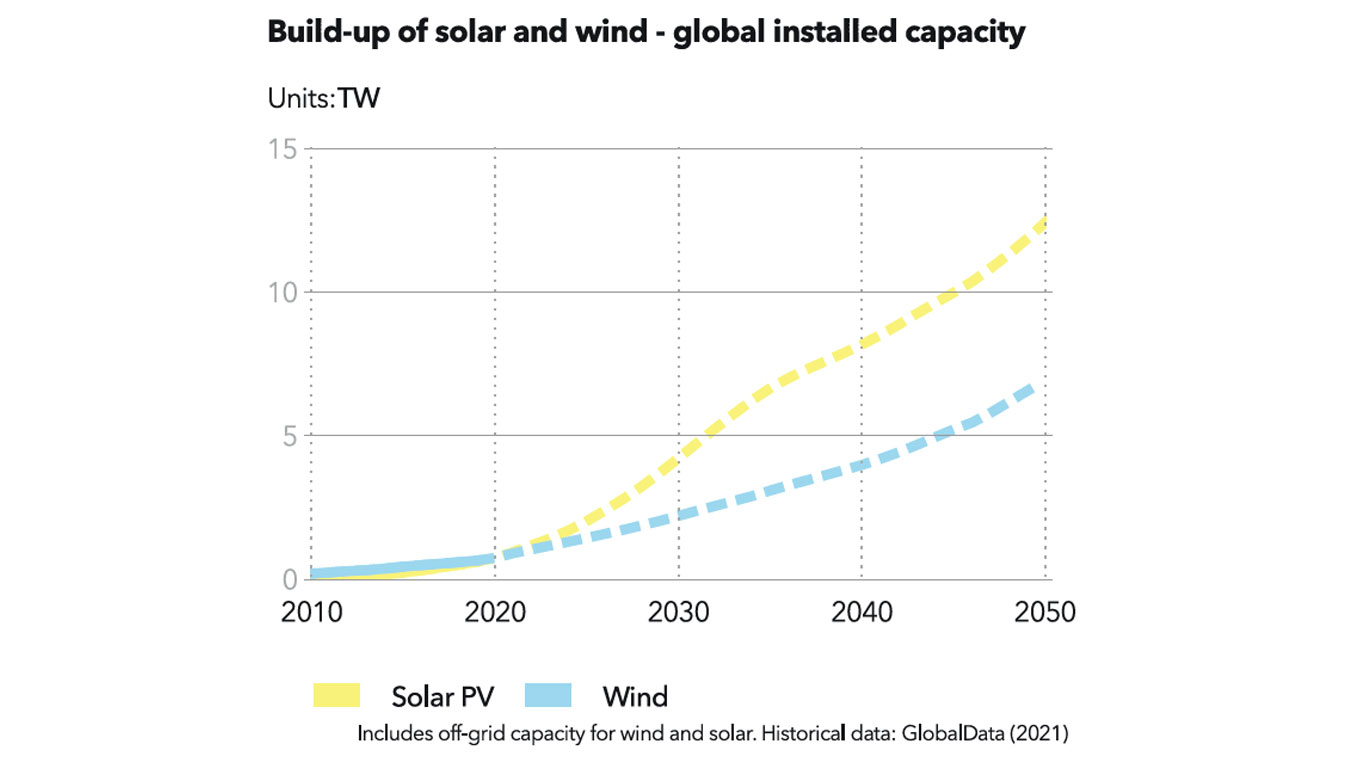 The present power system is not set up for variable renewables as the dominant source of production.

Yet plunging costs, government support for renewable power buildout, and carbon pricing will ensure that renewables will eventually dominate power generation. Over the coming 30 years, USD 12 trillion will be invested in both building a larger grid and adapting it to the variability of solar and wind through technical solutions such as connectivity, storage, and demand response.

The cost of power from solar and wind will continue to reduce but price cannibalization threatens the investment case for renewable capacity if cheap power is unused at times of ample supply. However, indirect electrification through power-to-X will require massive renewable electricity production, and along with various storage solutions, will ensure that surplus power will be used, and capture prices maintained at a satisfactory level. 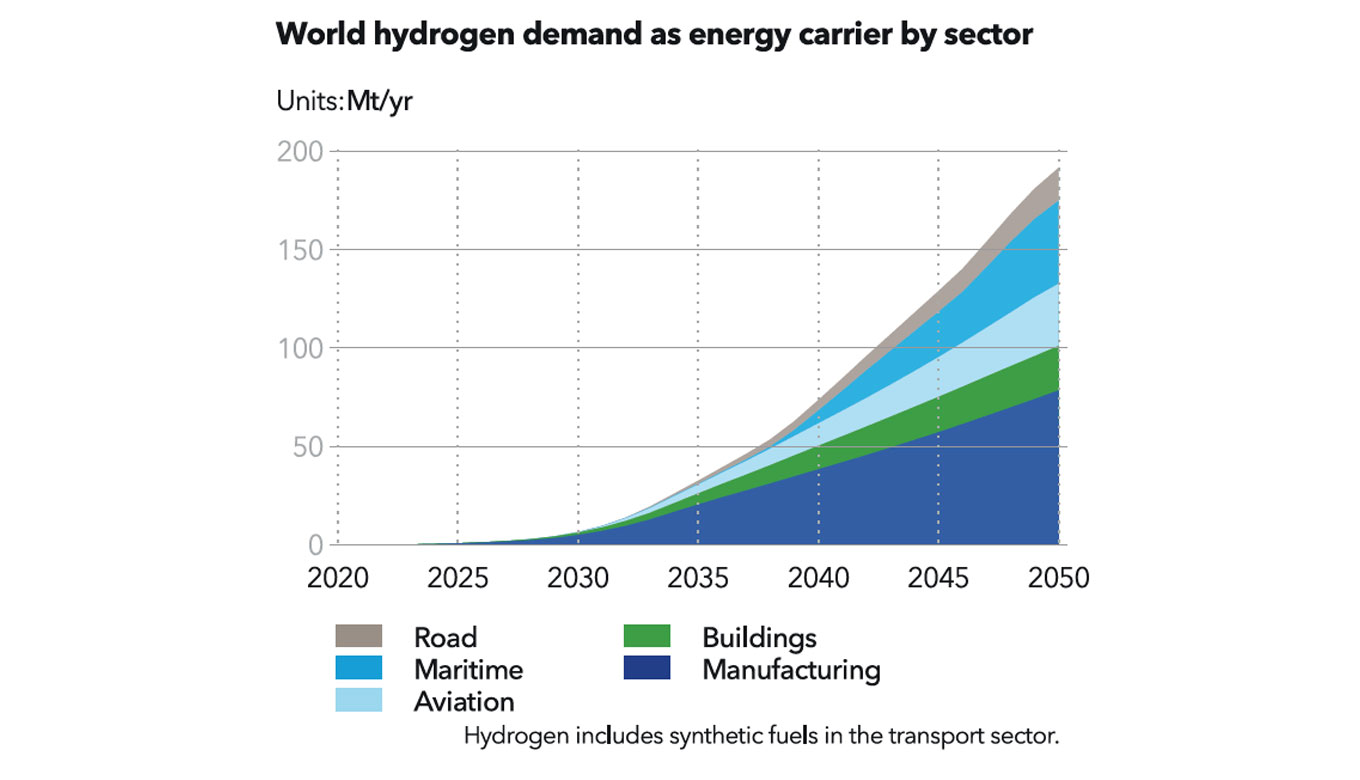 Hard-to-abate sectors are those that cannot easily be decarbonized through electrification, and include aviation, maritime, long-haul trucking and large parts of heavy industry.

These sectors are currently responsible for around 35% of global CO2 emissions, and progress in reducing these emissions is stubbornly slow.

Hydrogen is seen as the main decarbonization alternative for these sectors, with biofuels in a supporting role, mainly in aviation. Direct hydrogen use is often not suitable, and ships and aircraft require hydrogen derivatives and e-fuels such as ammonia and synthetic jet fuel.

Global hydrogen production for energy purposes is currently negligible and will only start to scale from the late 2030s, meeting 5% of global energy demand by 2050. Government incentives, similar to those given to renewables, are needed to stimulate technology development and accelerate uptake of hydrogen and e-fuels.

8. Most hydrogen will be produced from dedicated renewables-based electrolysers by 2050 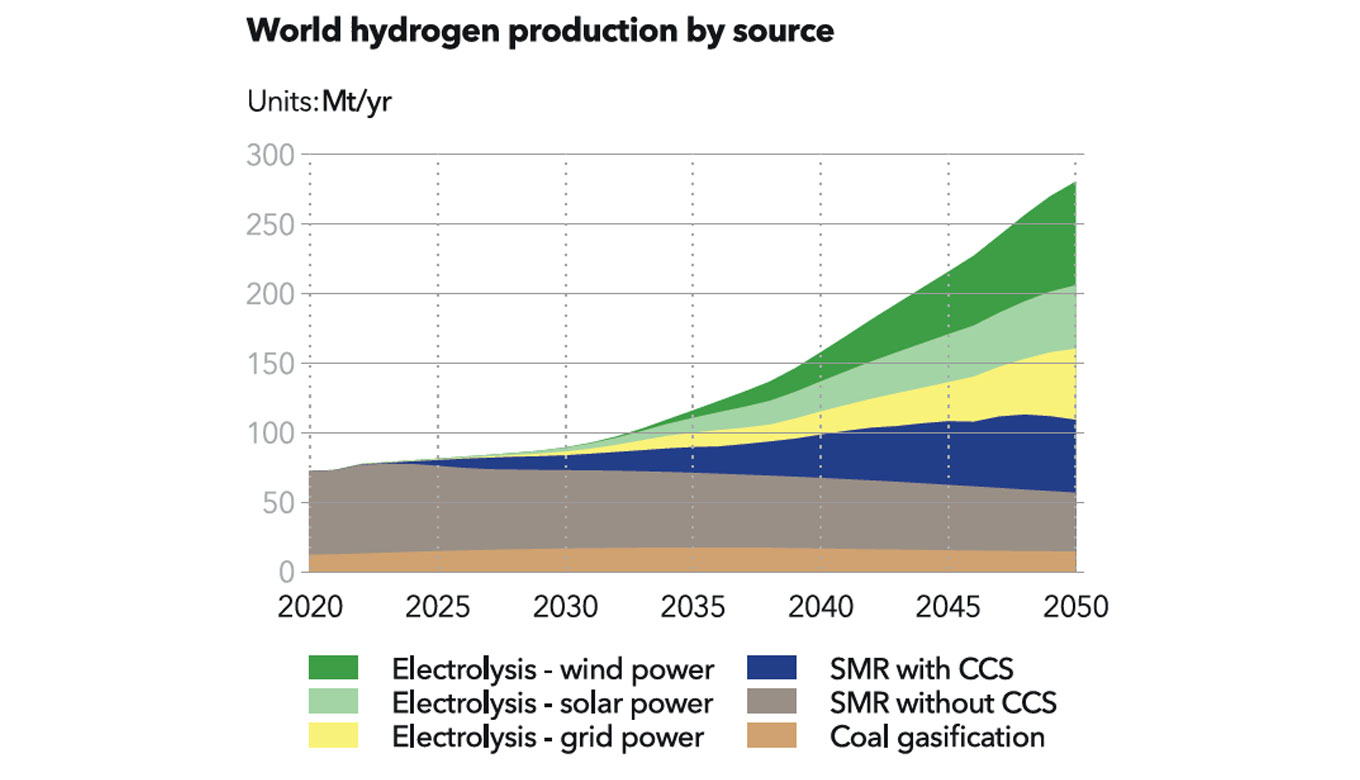 The current production of hydrogen as an energy carrier is negligible compared with the 75m tonnes of grey/brown hydrogen produced annually for fertilizer and chemicals production.

Blue hydrogen, produced by steam methane reforming (SMR) from gas with CCS, will replace some of the grey and brown hydrogen in the coming decades. In total, blue hydrogen will also comprise 18% of hydrogen supply for energy purposes by 2050.

Green hydrogen from electrolysis will be the main long-term solution for decarbonizing hard-to-abate sectors, including hydrogen as a basis for other e-fuels.

Electrolysis powered by grid electricity is disadvantaged by the limited number of hours of low-priced electricity. Its CO2 footprint will, however, improve as more renewables enter the power mix. The future production of hydrogen for energy purposes will be dominated by electrolysis using dedicated off-grid renewables, such as solar and wind farms. By 2050, 18% of hydrogen will be grid-based and 43% will come from dedicated capacity comprising solar PV (16%), onshore wind (16%) and fixed offshore wind (9%). 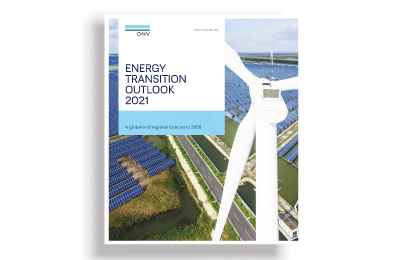