A region diverse in natural resources

With the exception of South Africa, the countries in this region are very to extremely poor. International development, mainly infrastructure-focused, has met with limited longer-term success. Lack of infrastructure – roads, power grids, and power generation – is a major hurdle for further development. The region is, however, well suited for power-system leapfrogging, as seen with other technologies like mobile telephony and banking.

We have previously shown that off-grid PV solutions will provide electricity access to hundreds of millions over the next decade. However, such installations will compete with small petrol or diesel power generators, and only provide sufficient power for smaller appliances, and not for cooking and space-cooling needs.

From 2030 onwards, we forecast significant uptake of EVs in this region. Although clearly hindered by the lack of grid quality, uptake will be helped by modest average vehicle sizes, with smaller batteries and lower costs.

The region’s lacklustre ranking in power generation per person continues, underperforming India which is in second place. However, not all transition sectors suffer, as the EV fleet share in Sub-Saharan Africa is on a par with other developing regions. This will benefit otherwise increasingly polluted urban centres, and also remote villages where off-grid power will stimulate uptake of cheaper EVs, which, in turn,can provide energy-storage services. 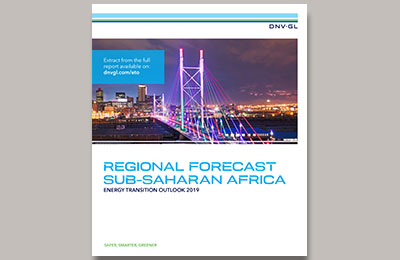