A region diverse in energy use and resources

The OECD Pacific’s final energy demand has started to decline and will continue to do so more rapidly than the fall in the region’s population. The manufacturing sector will see the largest reduction, a result of production sites moving to lower-wage regions and to efficiency gains. The efficiency of the transport sector is also increasing strongly, partly due to fast uptake of EVs.

Electrification of the transport sector will be the strongest driver for reducing oil consumption over the forecast period. Coal, the region’s second largest primary energy source, will continue to decline rapidly from the 2020s due to its replacement in the manufacturing sector by natural gas and in the power sector by natural gas and renewables. Due to strong electrification in all sectors, wind will be the largest source of energy by 2050. 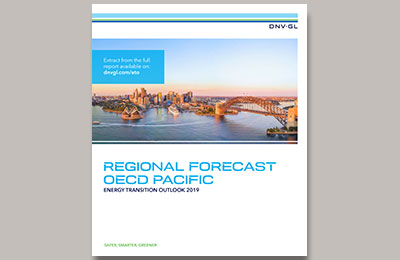