The leader of the energy transition

Electricity share in 2050 energy demand highest of all regions

Greater China’s final energy demand will continue to grow strongly for the coming decade, before peaking in around 2030. The peak and decline will be the result of a stabilization of the population, a reduction of the share of the secondary sector in the economy, and energy-efficiency gains in all sectors. These three forces are stronger than the effect of economic growth, which is also set to continue.

We expect the energy mix of Greater China to do a complete turn-around in the forecast period. Coal is currently by far the region’s largest primary energy source, although its use is almost flat and after 2030 will see a strong decline. Oil is the region’s second largest energy source and it will remain relatively stable until around 2030, when electrification of the vehicle fleet starts to reduce demand for oil. The use of natural gas will double over the coming decade, mainly driven by increased demand from the manufacturing sector. Hydropower is growing, and wind and solar PV will see strong growth during the coming decades. 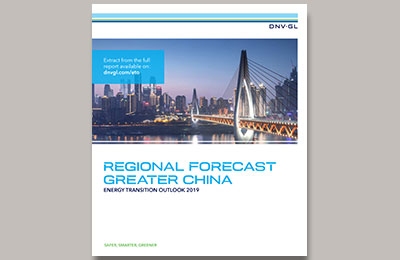